Pumpkin season doesn’t end with October. It’s a wonderful fall vegetable and the stews and breads made with pumpkin are perfect through the winter, too.

Today I had to do yet another snack for curling. With 3 family members in 4 different curling leagues I’m probably going to be making snacks a few more times. Today I was making snacks it was for H and the Little Rock league.

Their league requests helpings of salty, healthy, and sweet snacks for each child. And this being right before Halloween I was looking for Halloween treat ideas. Admittedly I took the easy way out on the salty snacks – a bundle of assorted chips for everyone, but I focused on the healthy and the sweet snacks.

Frankly, even the healthy snack felt too easy. I just peeled clementines and pushed in a celery stick that I had cut length-wise and pushed into the center hole of the clementine. The boys helped and I could have just had E or H do it by themselves. 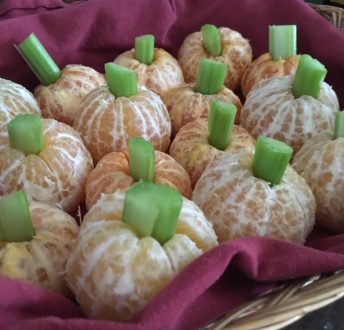 But I really wanted to go all out on dessert. I think it is obvious if you look at my FOOD page that I love baking dessert. I have all kinds of mold pans for cakes – flowers, Bundt, train cars, and for this one I broke out my pumpkin pan.

I love this pan. Maybe because I love pumpkin baked things, but also because it makes cakes just a bit smaller than a cupcake and barely any frosting is necessary. My kids love it because it feels special to pick out and then eat their own pumpkin muffin. They look different and it feels different to them that just getting another cupcake.

I went to my go-to recipe book, The Floyd County Cowbelle’s Cookbook (1978), and pulled out Ruthie Ellis’s recipe for pumpkin bread. I love this recipe. It always ends up feeling moist and has a pleasing pumpkin flavor. It is simple so even a beginning baker can succeed at making it and it makes 2 loaves. So you can hide one away for later after the kids have descended upon the snack table and devoured the first loaf. If you use the molded cake pans this recipe makes 36 little cakes.

It isn’t a muffin recipe exactly, but for a molded muffin or bread you want something that is slightly denser so you get perfect shape.

But, hey! Let’s get baking! 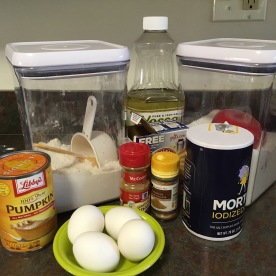 In a medium sized bowl combine the flour, baking soda, salt, cinnamon, and nutmeg together. This helps to make sure the spices are well distributed throughout the batter. There is nothing worse than getting a big bite of nutmeg in a muffin.

In a large mixing bowl (I use my Kitchen Aid mixer) combine the oil and sugar together. It won’t be creamy like when you use butter, but it still important to get the oil incorporated in to the sugar. Then add the eggs one at a time and beat it really well until it is a light yellow and seems fluffy like in the second picture below. Then add the pumpkin and blend it together on low until well incorporated. 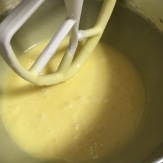 Add half of the flour mixture to the pumpkin mixture and turn the mixer only low to gently blend in the flour. Then add the water and continue to blend for about 30 seconds before adding the rest of the flour mixture.  Mix it together until just combined. The take the batter out of the mixer and give it a couple of beats to make sure there is no flour hiding at the bottom. The batter should flow off the spoon in a smooth ribbon when it is fully mixed.

Really grease the heck out of the pan. Nothing will break your heart like a cake that is stuck to the pan. I did add flour a couple of times to ensure they didn’t stick, but I didn’t like the residue the flour left. Instead I just sprayed it down really well and then poured in the batter. It worked just as well as with the flour and it looked a lot better.

Use a 1/4 cup measuring spoon and pour the batter into the prepared pan. Fill them only half way up or the cakes will be too big for your pumpkin patch. Give the pan a good solid rap on the counter to help get the air bubbles out and so you get a nice smooth surface. 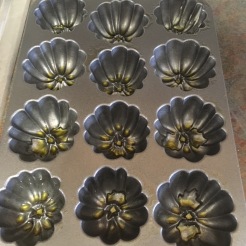 Then bake them for 20-25 minutes or until a toothpick inserted into the middle of a muffin comes out clean. The immediately tip them out of the pan and onto a cooling rack.

(If you choose to make it as 2 loaves grease the loaf pans really well and bake them for 1 hour. And it really is 2 loaves. I tried to put it into 1 pan once and it pushed itself out of the pan as it rose in the oven. I ended up with batter burning all over the bottom of the oven and a weird tunnel in the middle of the loaf. Epic. Fail.)

When then are totally cool you can give them a bit of frosting enhancement. Since they aren’t a cupcake you don’t need to really frost them up, but a bit of green embellishment gel from Wilton makes them extra festive. You can find it right next to the cupcake papers and birthday candles in the baking aisle.

It pipes on with no problem. I even got the sparkle/glitter gel for extra shine.

The pumpkins were a hit! Not a single one left in the pumpkin patch. Good thing I held some back for me. 😉