The Wilds of Iceland

It wasn’t all big cities and spas on our trip to Iceland. We also explored the great wilds of the interior.

The house we rented was just north of Sefloss in a middle of nowhere place that seems to be undergoing some development as a vacation rental spot. The houses are far enough apart that the land still felt wild and I never felt like my neighbors were watching my every move, but close enough that you know they are out there.

We stayed just about where the red Lego stud is sitting. Our house was perfectly positioned just to the south of Þingvallavatn or Þingvellir.

And for those you who are curious this character þ is pronounced as a “Th.” So instead of Pingvellir it’s Thingvellir. Pingvellir has more vim to it, I think. Thingvellir just seems like they couldn’t figure out what to call it and “Thingy-place” was the best they could come up with at the moment.

A very popular tour that many, many people take is the Golden Circle Tour. They have scads of professional tour companies that will drive you around to these places in enormous buses, but if you don’t want to be on a schedule you can easily drive yourself.

Below is a map I found at TheCultureMap.com of the Golden Circle route that we used. As we didn’t have to go from Reykjavik our route was cut in half, which was very nice for the kids (and the adults). 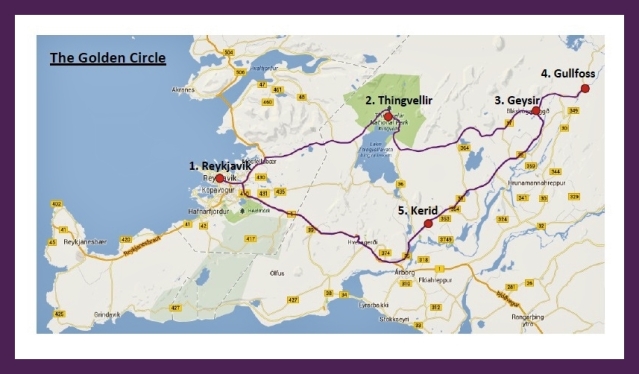 We started out going north to Þingvellir National Forest. There are so many cool things about Þingvellir!

Yes, that is a snow drift right there in the middle of the gap for no particular reason. And, no, there wasn’t any more snow anywhere else in the park. Yes, we did climb over it in order to continue our walk/hike.

Iceland is prepared for tourists, because once you get beyond this snow drift the path is paved and it takes you to the place where the assembly would happen. Representatives and chieftains came from all different regions to the assembly in Þingvellir. Laws were passed, disputes where ruled on, judges were elected, and criminals were executed. This assembly, or Alþingi, was established in 931 which might make it the first democracy in the world.

This lasted until 1271 when infighting broke down the cooperative spirit necessary for a democracy to flourish. Shortly after that Iceland was taken over by Norway. (Listen up, America.)

Anyway, you can either end your tour by walking down the stairs/paved hill to a parking lot or you can continue to walk on to some of the most beautiful waterfalls I’ve ever seen. 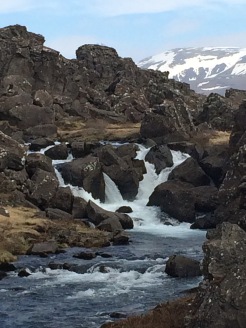 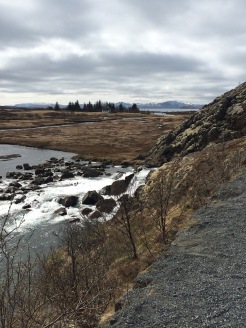 These are right near the place where the chiefs would legislate. Our guidebook said something about these waterfalls being his and hers execution sites, but I hadn’t read anything else to back that up.

We continued on beyond the falls to wonderful landscapes. The path was made out of wood decking so that we didn’t need to leap from lava boulder to lava boulder or risk going ankle deep in a hidden hole. All the waterways made this spot ideal for getting all those chieftains up to Þingvellir for the legislation meetings. 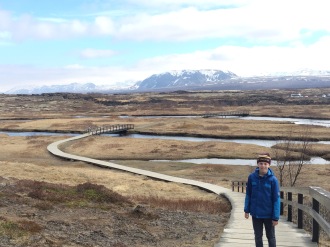 Then we came up to the last waterfall, which was the best, I think. 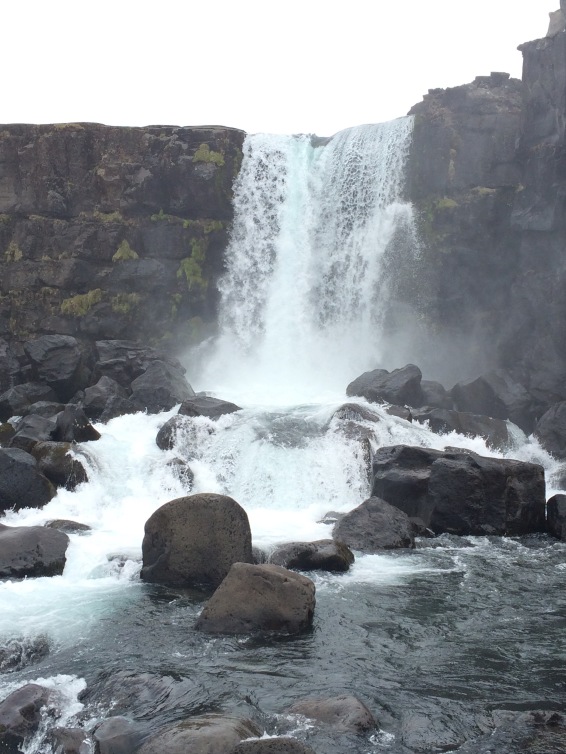 It was so gorgeous that the wooden decking that lined around the waterfall to give you a better view was filled with members a photographers club on a bus tour of Iceland. Tripods were crammed next to each other and if one person moved another ran over to take his place. They were even climbing up some of the boulders around the edge to get different angles. Pretty risky actually. The rocks are smoother here than in other places and the damp moss was slippery. Someone could have fallen in with their very, very expensive camera.

We were lucky to get this open area for this shot of me by the falls. 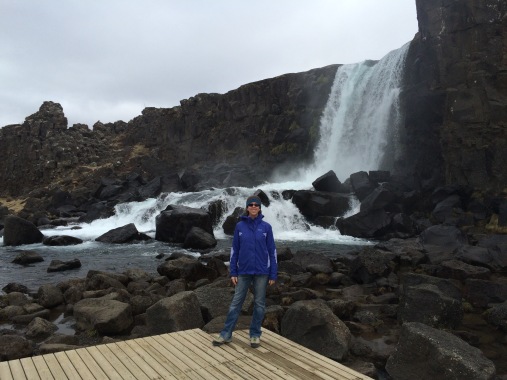 After we’d had our fill we turned around and walked the kilometer or so back to our car. There are parking lots closer than that, but we were driving a different route and so parked in a different spot than all the tour buses.

We had to decide between Gullfoss and Geysir next. Gullfoss is just beyond Geysir and you have to double back anyway, but Geysir was closer and it was almost lunch time so we went there to picnic and see some water under pressure!

Geysir isn’t a spot with only the famous Geysir in residence. There are about 5 or 6 other geysers there in various forms. Geysir is the most famous, though, because when it erupts it shoots hot water about 70 meters in to the air. It used to be far more regular, but an earthquake changed the underground formations and Geysir rarely erupts anymore.

It’s obvious, though, that there is a lot going on under the ground. When you approach the area it looks like the entire field is smoking.

This is geo-thermal heat escaping from the ground. The crust here is 12% thinner than anywhere else in the world making it easy to gather geo-thermal energy and also making it look like a rock and roll concert might breakout at any second.

We were approaching from the parking lot. They have a very large parking lot across the road so parking was a breeze.  And there is an enormous restaurant and shopping complex right there, too, so you don’t have to worry about packing a picnic lunch like we did. (Although, with little kids it ensures you have lunch ready whenever they get hungry and it does cuts some costs if you are on a budget.)

This was another spot ready for tourists. There are signs and a paved path that snake you safely around the different geysers. And in an attempt at safety consciousness, the have low, single-rope fences that try to keep you from burning your toes on the incredibly hot water.

This is the first geyser you see – the Litli-Geysir. It’s a small cauldron in the ground with water that was cheerfully boiling away like water in a pasta pot.  It’s always bubbling away!  I suspect this will change as earthquakes change the underground composition of the area.

The next geyser you see is the most active and dramatic. (Well, currently, anyway.)

It erupts about every 10 minutes and can shoot about 20 meters high.  It’s a great payoff! It’s dramatic and it’s frequent (important for kids who just want to go aready). Plus there are benches scattered about for those of us who wanted to sit and eat our sandwiches or just take a load off.

As you can see in the picture, you can get quite close to Strokkur. There is a sign warning you to stay up wind of an eruption if you want to stay dry. These two people obviously didn’t care about that.

Just 10 paces from Strokkur is Geysir. 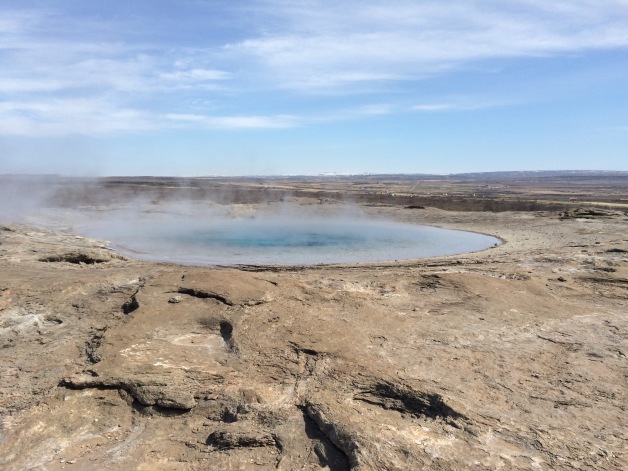 It looks like a crater on the moon. It gently steams away and vaguely threatens to do something spectacular. We waited and watched, but there wasn’t even a hint that it would erupt in the next week let alone the next 30 minutes.  The signs around do indicate that all this could change with the next earthquake or volcanic eruption, so don’t give up too much hope!

Our next stop was Gullfoss or the Golden Falls. It was only about a 10 minute or so drive from Geysir. There was a tourism center there with a large souvenir and sandwich shop attached to it. Not as big as at Geysir, but more than adequate if you wanted to buy any number of t-shirts, scarves, or wool capes. (Iceland is chilly, people.)

There were lots of other tourists like us, plus room for buses. Gullfoss is easy to get to, too. You just followed the path around the back of the center, down some stairs, and to the wide ledge above the falls.

Don’t worry, Mom, I’m not going to fall in. They have vague suggestions of safety ropes that look just a smidge more serious than the safety ropes on top of Mount Pilatus, so I’m perfectly safe!!

You can walk along the edge of the river to the top of the falls and see everything from on top a large prehistoric lava rock.  You get a bit damp from the spray, but it’s worth it. My 7 year old was not having any of it though. He was DONE. He wanted snacks and shopping for a puffin and that was it. I coaxed and tricked him into walking further with me and I got him out to the falls, but I think he’s going to associate Iceland with a sense of betrayal for the rest of his life.

Still worth it, though.

We didn’t go to Kerid, which is a volcanic crater that is just a bit south of where we live. It also promised to be gorgeous, but we were all kind of done at this point. Plus you get charged an entrance fee to see it and we didn’t really want to pay for something we may spend 10 minutes seeing. Frankly, I would rather go back to Þingvellir and do more hiking!

Liz and I dropped the men folk and littles off to the house and went on an adventure of our own. This is where we learned the Iceland isn’t all “tourist ready” and paved roads. We went in search of this restaurant we heard about that was supposed to be right next to a geo-thermal plant. So we drove. And then we crossed a one-lane, not entirely solid-looking bridge and got onto a dirt road. It wound around and curved back and eventually we found the place. It was a hotel and restaurant and was in the middle of nowhere right next to the promised geo-thermal plant.

We saw some people getting out of a truck and then running in swimsuits with towels to the hot springs next to the plant for a quick dip. We decided they were brave as we had no idea if that water was pleasantly hot, very hot, or melt your skin off hot. The restaurant looked fantastic, but in the end we traveled back to our house and grilled out. But we found this amazing view along the way.

These views are all over Iceland. You just have to be willing to take the paths not necessarily on the map and to stop every once in a while to appreciate things. 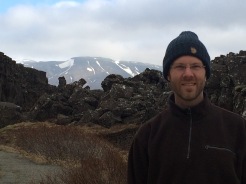 Oh, Iceland. I will be back. In summer. With reinforcements.

3 responses to “The Wilds of Iceland”