Gate-Crashing on the Pope

Last time we saw some of the major sites of Rome and most of us were delighted. This time we decided to invade – uh- visit Vatican City, which my oldest informs me is the smallest country in the world.

Vatican City is an actual country inside the city of Rome just like Washington, DC is a district apart from any state in the USA. Maybe not exactly just like DC. DC doesn’t have a gigantic medieval wall separating it from the rest of the world. (It probably should, but that is a topic for another blog post.)

Popes have lived in this location since 1377, but Vatican City didn’t become its very own country until 1929. Signing this treaty is one of the only things Benito Mussolini did right.

Vatican City is on the other side of the river from the main Rome sites and there are about 5 bridges that you can cross to get there. We unwittingly chose to cross over on the Saint Angelo bridge that had been built by the Emperor Hadrian. Go us and our accidental awesomeness!

The entire bridge is lined with statues of angels and saints. It is a sight to see all on its own. 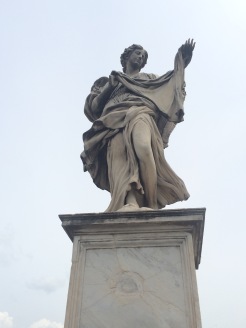 This bridge goes directly into the Castel Sant’Angelo. It’s the big round building in the picture above. It’s a whole history and art museum all on its own. We didn’t go there as I wasn’t aware it was a different ticket than the Vatican Museum so we turned left and continued on down the road to Vatican City.

This is where you really notice how crowded Rome is. Everyone was going to Vatican City today. The line for our mandatory gelato stop was hurried and stressful, but the kids got their mint chocolate chip so they were fine.  Souvenir shops were all over here. And all of them had thousands of rosaries to buy. Don’t feel you have to buy the first rosary you see. There will be plenty more along the way and there are about 3 rosary shops right outside St. Peter’s Square and then more inside the Vatican Museum.

As we were walking I looked ahead and saw a huge crowd of people and I wondered if something special was going on today. No. There was nothing special going on. Those hoards of people are the normal tourist crowds for the Vatican.

You absolutely need to buy a ticket to whatever part of the Vatican you want to see ahead of time or you will never get in. There were families, individuals, and loads of tour groups. We could tell who was together because the leaders were holding an umbrella or stick with a flower tied to it over their heads and their people were following behind like little ducklings. Some of the “lucky” ones had matching florescent hats on so they could find each other.  Plus they will mow you down should you choose to try and cross their paths.

St. Peter’s Square with the Basilica and St. Peter’s Tomb is grand. The Pope didn’t seem to be there at the time. So much for our plans to be invited in for tea. Instead we followed the street signs to the Vatican Museum.

The entrance is waaaay on the other side of Vatican City. It was about a ten minute walk around the Basilica and along the city wall to reach the museum. There was an enormous line of people waiting to buy tickets. We already had ours so we cruised right in with no problems. (Worth the service charge.)

After you get your audio guides and the most unhelpful map in the history of maps, we went outside into the courtyard and were greeted with garden statues, including these peacocks and the giant head of Augustus.

People are funneling into the museum like water down a drain and instead of turning right and seeing these fantastic sculptures, they were all turning left and going up some stairs.

We turned right and went to see the statues. 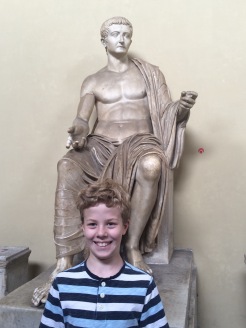 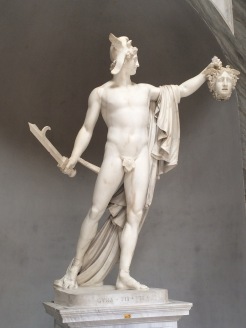 E and I had an interesting conversation about all the statues that had their penises covered with fig leaves. Thanks to Popes Innocent X (who preferred bronze metal to better contain the naughty bits) and Clement XIII (who went with stone because the bronze seemed to be accenting the bits) all the statues in the museum have been outrageously censored. At least they didn’t have them destroyed like Pope Pius IX.

Eventually we had to join the line and crowd, so we suffered through it and got to see these. 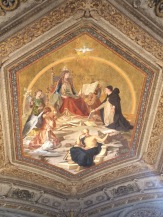 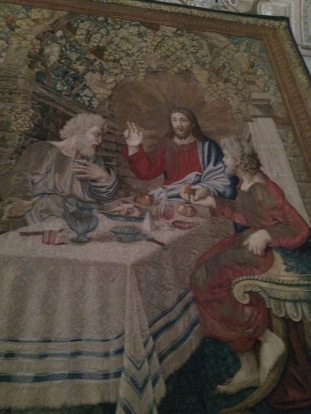 They were all breathtakingly beautiful. I would have liked to remain in each room longer to fully appreciate the years of work these pieces, floors, and ceilings represented, but the crowd was literally shoulder to shoulder and pressed us forward along with the flow. At one point I thought I could have lifted my feet and been carried along with no problem.

Eventually H’s feet got too tired to continue so I put him on my back. Having his feet sticking out in front of me and to the side actually seemed to get me some space. I should have done it earlier.

Right about the map hallway/room the crowd seemed to thin out a bit. They are paintings of all the different Christian colonies in the world back in the Renaissance. They were painted by the humble friar, Ignazio Danti, who did a magnificent job. 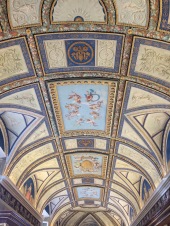 After what seemed like mile of trudging along and seeing signs promising the Sistine Chapel was coming along (and please do not take photos or videos), we were suddenly shunted off to the left and into a room where there were a crowd of people standing in the middle like sheep in a pen. Docents in very official security-looking suits were standing along the edge grabbing us by the shoulders and saying “Keep right. Keep to the outside,” while shoving us ahead.  I felt like I was being evacuated from a burning building or crashed plane. Go Go Go Go!! Move Move Move!!

We were just about out of the room when suddenly Mark grabbed my arm and yanked me into the middle of the room with the sheep.

“What?” I asked, nervous we were going to be yelled at by the docents.

“I kinda want to stay and see this,” he said.

I looked around. Lots of good murals on the walls. Curtains painted on about a third of the way up the walls and then Bible scenes. It was really pretty.

So I snapped a picture. 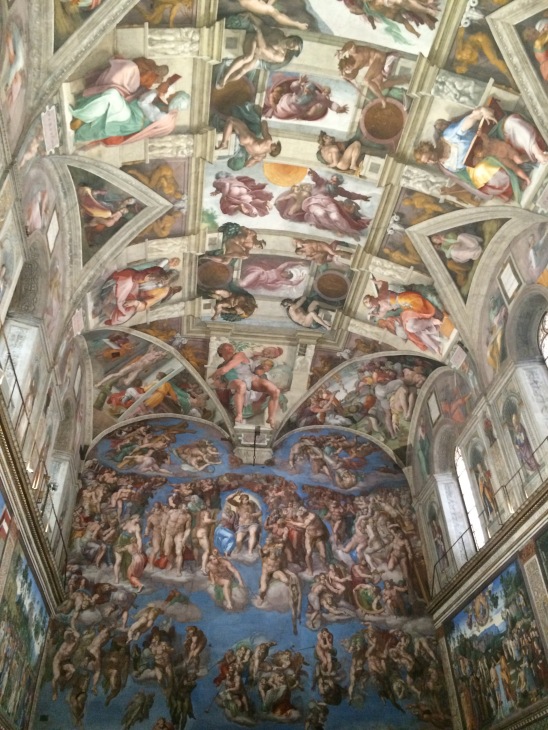 I hadn’t even put my phone down when a docent seized my shoulder and hissed in a voice similar to Gozer the Gozerian “NO PICTURES!!!!” He was so pissed his eyes could have shot lasers at me.

I looked at Mark, “What’s his problem?” I asked.

“Uh. We’re in the Sistine Chapel.”

And I looked up. Darned if those docents weren’t pushing us into and out of the Sistine Chapel! Practically at a run! Well, we weren’t going to be rushed now that I knew where I was!

And I was secretly pretty chuffed I had taken a picture. And if you look really closely you can see Adam and God’s legs from the really famous part of the Sistine Chapel where I cut them off from the rest of their bodies.

In my defense, I was aiming for the gigantic mural at the end and hadn’t even looked up yet.

H looked up and said, “Hey! It’s that picture that is hanging on our hotel wall!” At least we know he pays attention.

As we were standing there, gawking with our mouths open, a docent would come onto the loud speaker and say “SILENCE!! SILENCIO!! SILENCE!! QUIET!!!” The volume of the crowd, which had been climbing from SILENCE! to a murmur, went back down to practically silent punctuated by the docents yelling “NO PICTURES!!”

In case you wondered if all this hype about the Sistine Chapel can be believed, the answer is yes. It is a wonder to behold. All the architectural features above are painted on. It is actually hard to tell in person that they are only two dimensional. It looks so very real. The shadowing and use of light confirms that Michelangelo is a genius. The people look like they could just pop right off of the walls and walk out the door.

We stood and looked until H told us, “Ya know, people, this picture is on our wall of the hotel. We could just go there and see it.” Paying attention, but not quite getting it.

There is actually more to the museum after the Sistine Chapel, but this is the apex of the experience. The treasures you see after this are, indeed, impressive, but we found ourselves talking about how awesome the Chapel was as we walked along to the gift shops and exit. (Note: You can buy rosaries of various values in several gift shops that you meet along the way out.)

A final word, the museum closes at 4pm. That means the little cafe and cafeteria inside the museum also closes at 4pm.  If you are hungry for a snack the exit to the museum dumps you out across the street from a very cool ice cream and deli shop with the highest prices I have ever experienced. However, they do the gelato huge justice and you end up getting more of a gelato work-of-art with thin cookies, sauce, and whipped cream than just two scoops in a cone.

Dinner that night was an Italian experience at a street restaurant just around the corner from our hotel. It was delicious and the side show of watching the waiters add, subtract, and rearrange tables was quite amusing for us. These little street restaurants are all over Rome. If you go I recommend you just find one around the corner from your hotel and settle in for the evening. Make sure the pasta is house-made and you won’t be disappointed.

2 responses to “Gate-Crashing on the Pope”