About a month into our stay in Switzerland Mark decided he wanted to visit every canton before we had to move back. This trip to “find” William Tell took us to two of the final three.

We first went through Schwyz and visited the capital city, also named Schwyz. Schwyz, the city, had been around since the 700s! There are a few things left from that era, but a lot of it is gone. Partly to the passage of time and a quest for progress and partly because they believe there was at least one earthquake around 1117 and a large fire that swept through the city in 1642.

Much of Switzerland’s historic artifacts can be found in Schwyz.

Schwyz is where the Bundesbriefmuseum that we visited is located. It not only had all of the charters and treaties that lead to the formation of Switzerland, it also had one of my new favorite paintings.

This painting was done in 1841 by Ludwig Vogel and is titled Die Eidgenossen bei der Leiche Winkelrieds, or The Members of the Swiss Confederacy Look at the Corpse of Winkelried.

Arnold Winkelried was another legendary hero similar to William Tell. According to the old tales Winkelried threw himself on the spears of the Hapsburg troops during the Battle of Sempach in 1386 in order to break the line and open an avenue that the Swiss troops could get through. He allegedly said something really patriotic and inspiring about being united and “Swiss” and that inspired a stronger Confederacy of Switzerland.

Each of the cantons are represented in the painting. We had a good time trying to recognize them all, especially since we were familiar with all the cantons. Basel is the guy on the far left in the yellow and black striped outfit looking shock and appalled.

You can play the same game we played and try to match the canton shields to the guys in the paintings.

Here’s a hint… The guy in the front with the horns and cow ears is Uri. He is actually their patron saint and you can find him painted on the city hall and different buildings around the city. 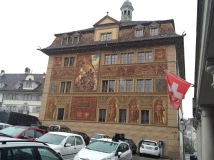 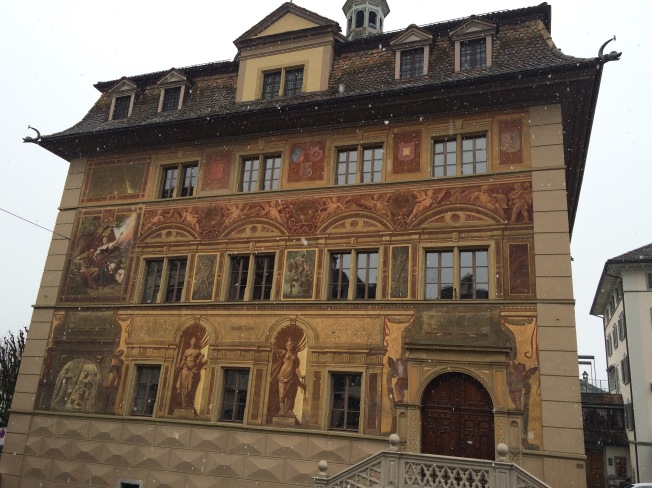 The city hall or Rathaus sits in a large open plaza that is slowly being turned into a parking lot and is flanked by 17th and 18th century buildings, with the St. Martin’s church, built in the 1770s, peeking out over the roof tops.

This barn or house below is right off the central square. It is part of the Bethlehem House. It was originally built in 1287 and was rebuilt, with a new stone foundation in 1540. It survived the fire and was improved over the years and is now being actively preserved by the canton.

This is the main house and a picture of the huge grounds is below. It’s hard to believe this huge swath of farm land is right in the center of town! 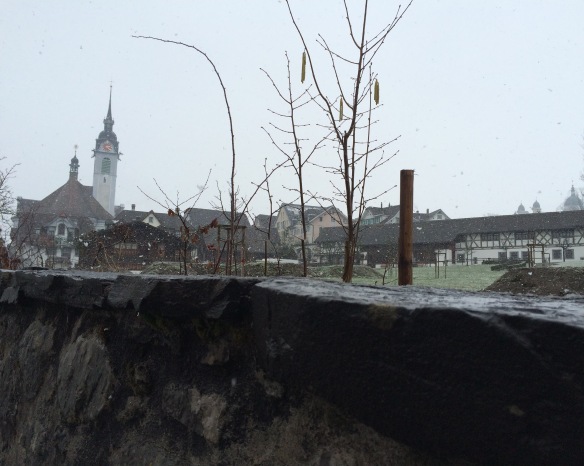 As you can see from the pictures it is snowing and cold. After our children accused us of torture, we decided to find a place for a cup of something hot and a little snack. And we found the most amazing little cafe!

The interior was straight out of the 17th century and we got hot chocolate, a couple of local beers, and POPCORN!! The boys were so delighted they ate two huge baskets.

We wandered around in the cold with heavy wet snow falling for a bit longer before we high-tailed it back onto the train and to our hotel in Altdorf, which was in the canton of Uri.

Altdorf, literally Old Town in German, is a really cute little town right along a spur off of Lake Lucerne. It’s not right on the lake because the lake and rivers used to flood, so they smartly built the main part of the city on the high lands. People have been living on this site since the 3rd century BC so this must be a pretty good spot off the lake to live.  The buildings are beautiful! 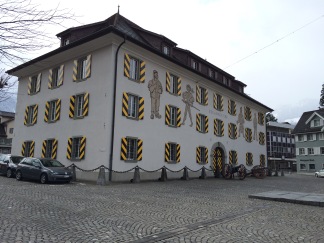 There is a plethora of places to eat right around the main William Tell square. We stopped in one place that combined Thai and Swiss cuisine. “Interesting” is a good word for that kind of combination. I found the food delicious and we were all extremely happy with our choices.

The hotel was extremely pleasant, although we found the doors a bit short.

But the beds were comfortable, it was warm and dry, and there was a bar downstairs so it was all good with us.

The next day was a much more pleasant day to enjoy some of the area. We went on our William Tell walk that day and also found the town of Fluelen, where we caught the boat to the Tellskapel.

They have a great sense of humor.

All-in-all this was is a great trip. You could easily do Altdorf as a day trip. If you go in the summer you can boat across the lake or take your bike on the trails that circle the area or hike on one of the many, many trails that lead up into the mountains.

The view is more than worth it.