You will find it, too, if you know where to look. It’s a tiny storybook town right before the Rhine River meets Lake Constance along the northern border where Switzerland meets Germany. 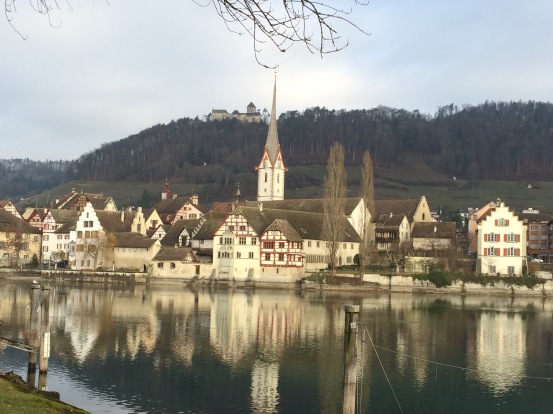 Stein-am-Rhein, whose name literally means Stone on the Rhine, was founded sometime before the year 1000AD. It has one of the most preserved town squares in Europe. It dates to the Medieval period and has been meticulously preserved and restored.

Every building in the square is painted with detailed murals. Some tell stories. Some depict market scenes. Some are just art. All are beautiful. 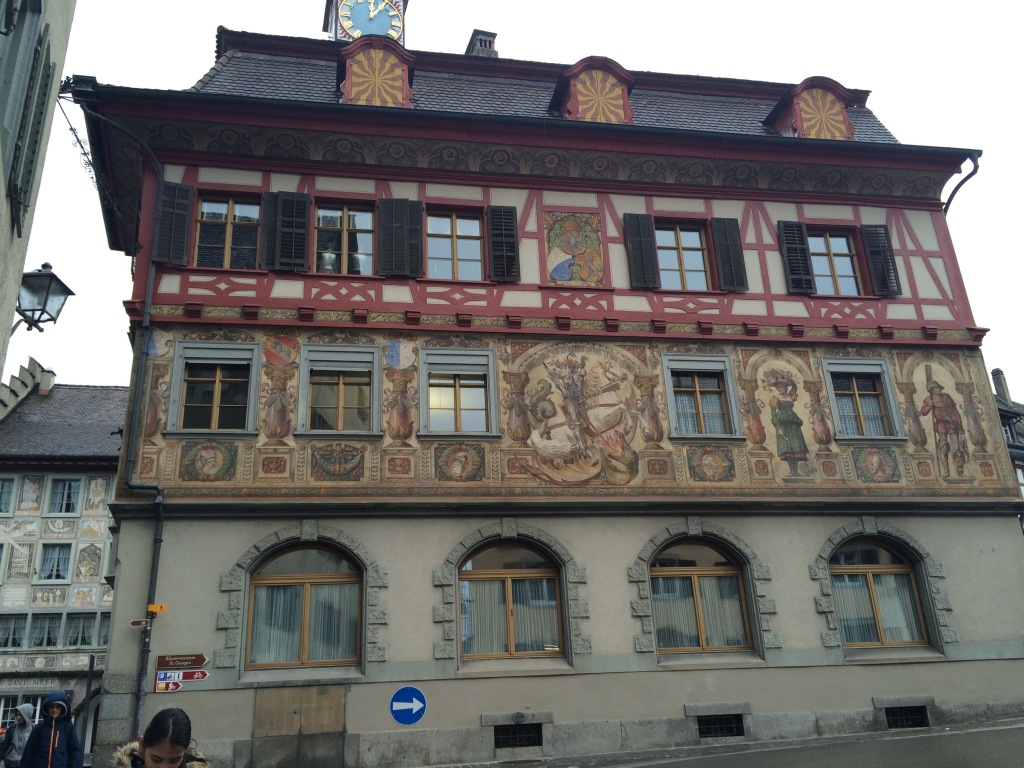 It’s even on the sewer covers!

Some of the buildings have mosaics as welcome mats in front of their doors. The dragon is a popular choice. 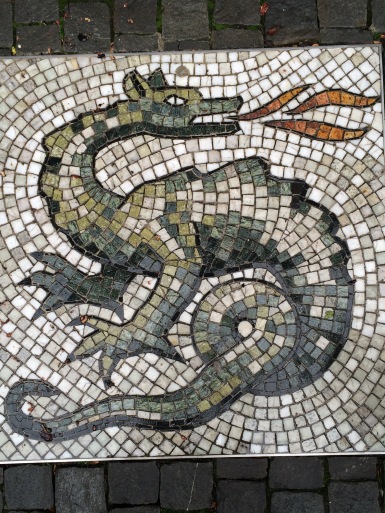 This stems from St. George’s Abbey, a Benedictine monastery, that was moved to Stein-am-Rhein around 1000AD by Holy Roman Emperor Henry II, a monarch who reined so long ago everyone has forgotten about him. He did this for purely political reasons. Stein-am-Rhein is positioned ideally at the mouth of Lake Constance where the Rhein River starts and where two major trade routes cross. This was back when the Abbot was also a city administrator title and not just a religious figure.

We actually have the last abbot, the awesomely named David von Winkelsheim, for all those lovely murals and frescoes in the town square. He oversaw all of it in the very early 1500s.

But The Reformation soon came and all the art and wealth went to Zurich for “safe keeping.” The abbots got permission to stay in the monastery until their deaths, but as the political officials suspected the abbots, particularly Mr. von Winkelsheim, of secretly plotting with the Habsburgs, they ended up locking them up in those abbeys and forbidding them to leave. Mr. von Winkelsheim managed to escape, but ended up dying not long afterwards.

The Cloister remains a popular destination. The museum was closed on the Monday when we were there, but some of the grounds were open. It is stark and wonderfully old.

The church attached to the cloister is topped with this impressive spire that is surrounded with dragons that spit water during heavy rains.

This mural, like the other frescoes in town, survives wonderfully preserved and gives us the date and clues to the patrons of the cloister.

The cloister is built right on the river/lake and has it’s own private entrance.

The budding mystery author in me likes to think of it as a perfect way for the abbot to escape or to sneak someone or even a contingent of Hapsburg soldiers into the city to take it over.

As you can see they have their own steps and the cloister is literally on the water. In fact, the border with Germany runs through the water. The cloister’s position on the water actually makes wonderful “sneaking over” points between Germany and Switzerland. There is no information if people actually got out of Germany during WWII here.

Stein-am-Rhein is so close to Germany that it was one of the towns accidentally bombed by the Allied forces on 22 February 1945. 21 people died. There is a monument in the town, but we didn’t find it.

One thing we did find was an old monastery on an island.

With a Christmas tree in a boat.

It’s a little bit of a walk away from the town. You cross the bridge and walk along the opposite bank for about 2 km. Like other paths in Switzerland, this is an official hiking and biking trail. It is well marked and maintained and well traveled. We met at least 9 other groups of hikers. Some stopped to see the monastery and some simply continued on to the next town.

The monastery is small and unassuming. The boys thought it was just a big house out there. 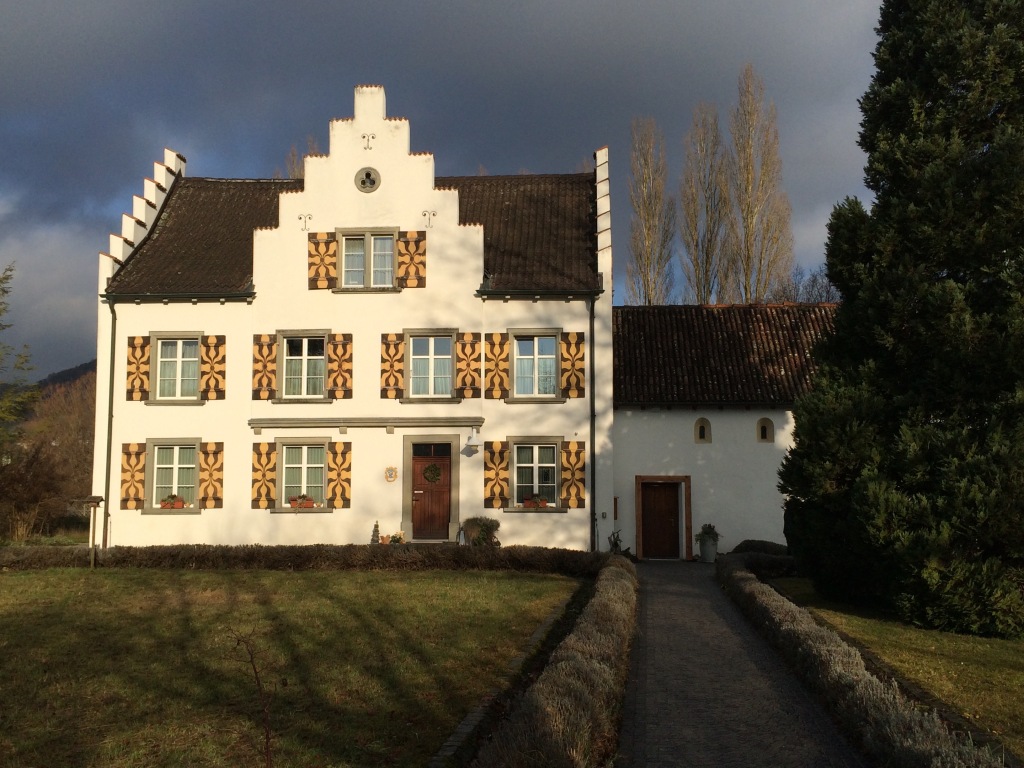 It’s small because it’s old. It was founded in 958AD. Most of it is living quarters for the remaining monks and the caretakers and there is a small chapel off the right and attached to the house. 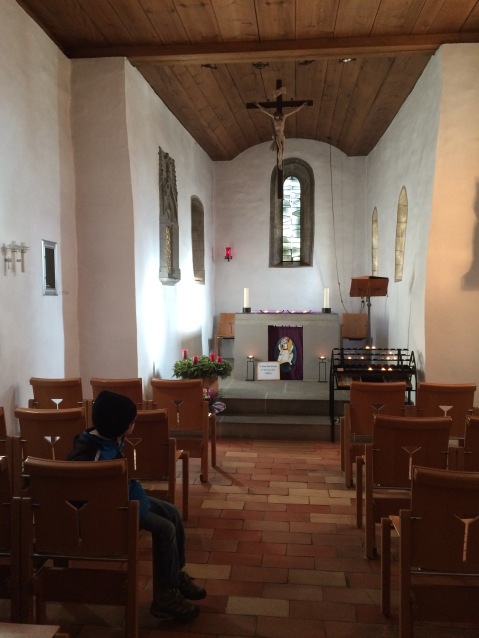 There is space for about 21 parishioners, 1 priest, and 1 organist. It’s tiny! I think my living room is bigger than this chapel.

They even have a relic! A bone or something from St. Ot(h)mar who was the first abbot of the Abbey of St. Gallen. As you may recall we visited there.

The tabernacle was also interesting. A gold-plated door set into a carved stone facade. They do have services occasionally and will have (very small) wedding ceremonies.

And there is room for an organ. It is also small, but (I am assuming) mighty.

After our inevitably short tour of the chapel (6 paces this way, 12 paces that way) we went back outside to the unseasonably warm weather.

The boys had found a friend. This tuxedo cat had followed us over the wooden bridge. The boys had picked up long stalks of grass and had the cat pouncing on them left and right for over an hour.

We need a cat.

Because it is practically required, this monastery also has a labyrinth.

It’s only 3 in the afternoon, but the sun is sinking quite, quite low in the winter. We have the contemplative lighting of sunset with all the energy of it being the middle of the afternoon.

In the center is a sculpture of some kind that seems like it came from an alien planet.

And in a truly amazing display, this man and a woman who is out of the shot have gone down the the beach and are communing with the swans.

They cooed to them and rattled off some quick-fire Swiss German along with rattling a bag of bread crumbs. This swan and his mate came out of the water to be patted and rubbed and fed.

We talked about this as the cat followed us back across the bridge, much to the relief of the swan lovers. And we also chatted appreciatively about the awesome things that people choose to add to their yards.

Stein-am-Rhein is the definition of “picturesque”. It is a wonderful place for a day trip. It was only 2 hours by train and probably only 90 minutes by car. The winter market looked extremely promising and all the biking trails next to the lake and the hiking trail up to the castle would make a summer excursion very fun.

It is a popular destination for tour groups and their buses. In the summer it is recommended that you get there early in the day to miss the crowds. We were visiting in December right after the Winter Market was closed for the season so we pretty much had the town to ourselves. It is a jewel, however, and worth the visit for the day.