It actually gets hot in Basel in the summer. This summer some of the high temps were around 100F! I don’t know what I was expecting, but it wasn’t having to endure 100 degree heat with no air conditioning.

The people of Basel have obviously had to endure this kind of hot weather before and they have a unique way of coping.

People around here literally go jump in the river when it’s hot. They go up river a ways, jump in, and float down to cool down. By the hundreds!

The lunch hour seems to be a favorite time to Rhine swim.  People put on a swimsuit at work and either walk to the Rhine in the swimsuit or put on a t-shirt and shorts over the top.  When you get to the entry point just by the Tinguely Museum you strip down by the water, throw your clothes in a special water-proof floaty bag that is shaped like a fish, and jump on in!  I’ve even heard that people who work by the Tinguely Museum commute home this way.

People use the bag as a pillow or a kick board as the river whisks them away. 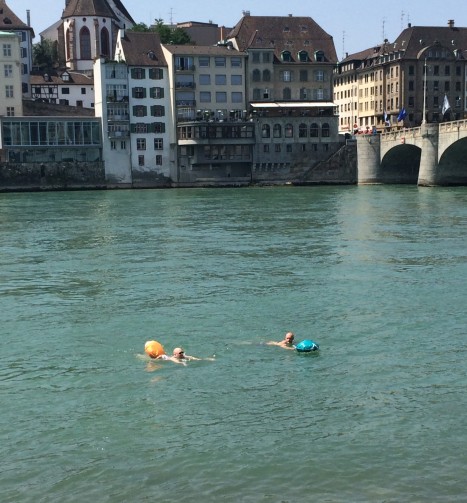 Even Mark tried it!  He went down at lunch time, bought his float bag, and plunged into the water.  He said it was really refreshing – not chilly at all and perfect for a really hot day.  He must have done it at least a dozen times.

And the Rhine isn’t the only place people get relief from the heat!  They also jump right into all the fountains around town!

Right after we saw these kids, we passed a group of 50-something year old men in Speedos. I can only assume they were heading up river to jump into the Rhine and float down, but before I knew it the kids and I heard this loud SPLASH!  One of them couldn’t wait and plunged into a small water trough fountain we had just passed. Half the street was covered in water.  They were all laughing like teenagers and we giggled to ourselves as we walked along.

We also found two families with babies lounging in the fountain right outside the Münster like it was a hotel hot tub.  It was almost resort like with the ice cream stand next to it and a small band across the plaza.

Everyone also uses the fountains to refill their water bottles. Or, if you are E, you just take a sip right from the source.

It was fun to see such a buttoned up city like Basel let its hair down.  You get to see it for a short time during Fasnacht, but it was so nice to have day after day of a casual attitude around town.  It was like the whole town was having a vacation.

Now that the kids are starting school again you can see things are slowly buttoning up again and Basel is getting back to business as usual.  But it’s fun to know that the guy walking down the street in his Armani suit probably stuffed it in a fish bag and floated in the river last week.