Our boys’ school, IS Basel, has a welcome committee that plans outings for the parents as a way of getting to know the Basel area and other parents at the school.  I’ve done other things with them and it has always proved to be a good time with a bunch of fun people.

Today both Mark and I went with a group to the Feldschlössen Brewery!

When I told him I had signed up for this tour he went all quiet with jealousy.  So he decided to take a morning off of work coming along.  It’s probably the one thing he’s wanted to do since we moved here.  See, Mark is an amateur home brewer and he was very keen to see a professional brewery.

The Brewery is located just outside Basel in Rheinfelden.  It was founded, as a helpful introductory movie tells us, in 1876 by Theophil Roniger, a brewer, and Mathais Wüthrich, a farmer.  In only 22 years they became Switzerland’s largest brewery.

The idea was to have a self-sufficient brewery.  A place where they grew the barley, raised the hops, made the malt, and then brewed it all together.  This idea still exists to an extent, but they produce so much beer they have to buy in most of the ingredients.

They even had teams of horses pull wagons to make deliveries.  Eventually, but sooner than most breweries, they graduated to steam trains.  They actually had a rail line put in that leads to the factory door.  They still keep the Belgian horses, much like the Budweiser Brewery keeps their Clydesdales, but these ponies still deliver beer to pubs in nearby towns.

They were way ahead of their time.  They had trains before anyone else and they also put in an automatic ice maker early on to keep the lager cool. Before that they took the horses up into the mountains to cut ice out of the glaciers and rivers, a lá the opening scene of Frozen.

Feldschlössen is sold everywhere around here, including in their very own on-site, very nice restaurant.  There are pubs and restaurants that sell only one variety of beer and for most of them that one beer is Feldschlössen.

The buildings, interior and exterior, are beautiful.  Intricately tiled walls.  Hand-painted murals on the walls.  Stained glass windows.  The main/historic part of the factory is done in a chateau style. 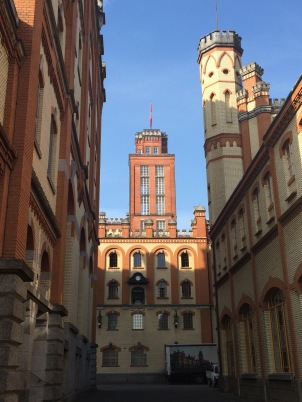 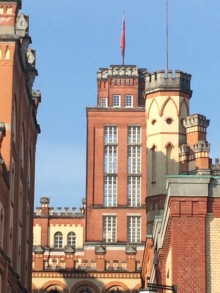 The Swiss, like many other cultures, believe in combining the functional with the beautiful.  When things are beautiful to look at you want to keep them looking beautiful.  That translates into buildings and companies that survive centuries.  It results in a high morale from the employees.

That was apparent from everything our tour guide told us. (A man who apologized for his poor English and then proceeded to speak more fluently than many of my American-born college professors.)  He enthused over the malt and hops; the water and the yeast.

And since we are all children at heart we couldn’t wait to stick our hands into the bins.   By the way, hops have a very powerful odor.  Our guide opened the lid of the bin and I could smell them 20 feet away.  He also said that they only use the female hops, once again proving females are the best and males don’t matter (his words, I swear).

They taken the time to preserve the past.  I wonder if they have their own archivist? (Eh, Shaun?)

This is the old cooling room. All those fantastic machines still work.  They not only provide inspiration for Steam Punk costumes, they also provide all the cooling needed to keep the lager at the proper temperature for fermentation.

They do have a new, more modern wing of the brewery.  It’s an amazing ballet of movement.  Most of the people who work there are engineers; keeping all the machines humming and the bottles filling.

The green bottles snake around at an incredible speed.  You really don’t want your hands near any of that!  It was mesmerizing.  I could have had watched it for hours.  But then I would have missed the keg room!

See! The keg room!  The round thing is like a keg merry-go-round.  The kegs wait nicely in a row and each take their turns slowly whirring around until they are full.  When they have had enough they get off near the palette area, where they are lovingly forklifted into a shipping area.

Look at them all! Kegs for miles!

And, finally, the moment we were all waiting for.  Really, it’s the reason all of us signed up for this tour.  It’s time for THE TASTING!!

Our guide took us into that posh looking restaurant I talked about earlier and sat us down at two long tables.   Lovely bready pretzels were waiting for us.  We chatted for a bit waiting for our first quarter cup of beer to taste.  Then a beautiful barmaid came with actual full glasses of beer!!! 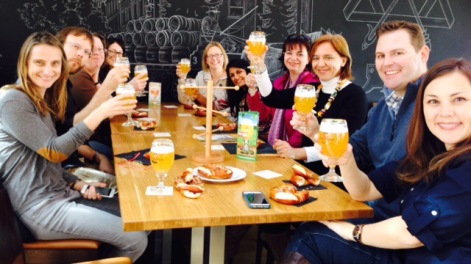 Our excellent group! It was a tremendously fun way to spend a morning. And, hey! beer at 11am!

If you would like to schedule a tour for yourself click onto this Feldschlössen website. They give two tours per day, one in the morning and one in the evening. The tours of up to 15 people run for CHF 15 each. For groups of over 15 people the total cost is CHF 250 to be split among the group members.  You can call to set things up at +41 (0)848 125 000.

5 thoughts on “The Swiss Family Carlson Parents go to a Brewery!”