Disentis and its little sister, Sedrun, are little skiing towns in the southeast portion of Switzerland past Lucerne by about 30 minutes and in the Canton of Graubunden.  (The leadership that led to the formation of the canton was called The Grey League.  It sounds like a comic book hero team and, therefore, makes this the coolest canton in Switzerland.)   They are in the Romansh speaking portion of Switzerland and if you speak Romansh the real name of Disentis is Muster and so the official name is Disentis/Muster.  Got it?  Good!

Disentis was first mentioned in 765(!) and the monastery started appearing in texts in 720.  I think I will never stop being astonished at the age of different communities in Europe.

We went there because Mark’s curling team was playing in an outdoor tournament!  Mark was extremely excited to be able to curl outdoor in the mountains of Switzerland.  The kids and I were thrilled with playing in the snow in the mountains.

Of course we traveled by train.  Actually, the winter snow had closed several roads up into the mountains and we would have never have made it otherwise.  The snow made the trip very picturesque. 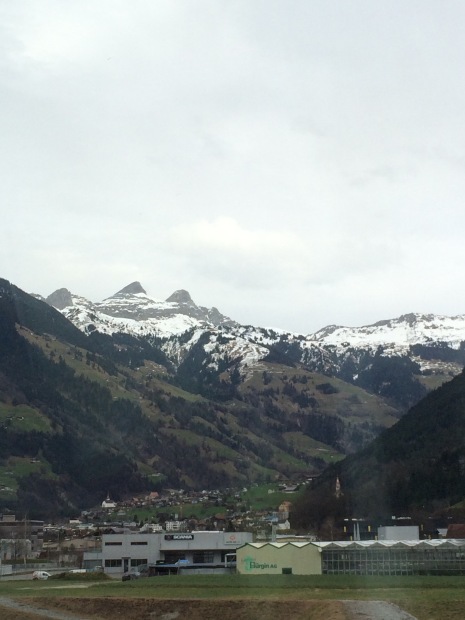 Taking the train also allowed us to walk around and have chats with all the curlers on our team (9 of them in total besides the children and I).  The leader of our group was a true entertainer.  He brought along the most incredible picnic – sandwiches, wine, and beer for the first part of the 4 hours journey and then cheese and bread with more wine for the second part.  The children had a great time.  He brought juices along for them and they absolutely loved the sandwiches and being able to wander about the carriage.

The weather was quite something.  It was snowing when we arrived at our hotel in Sedrun and it snowed for 2 days.  Our intrepid leader, Sammy, was quite displeased because it meant no curling because they couldn’t keep the ice clear.  (I strengthened my knowledge of German curse words and learned a couple Swiss-German curse words.)  However, we were all consoled by hanging out in the hotel’s pub area drinking beer and sampling the grappa after dinner.  Sammy proudly pointed out the grappa area and explained the hotel had 180 different kinds of grappa for tasting.  That’s when I realized we were also in the Italian speaking part of Switzerland.

The snow didn’t stop us from getting out, however!  The children loved the snow and Sedrun was equally lovely.

And Mark got to visit a monastery in Disentis with the other curlers.  (The children were uninterested in seeing yet another church in Switzerland so we stayed in and sipped hot chocolate while their snow things dried.)

And finally on Sunday (probably because of all the candles they lit in the Abbey chapel), the weather cleared and it was declared by all the veterans to be perfect curling weather!!

For H and E, it was perfect snow-bathing weather.

And Sedrun was really beautiful as well.

I couldn’t get enough of the snow covered and tree-dotted mountains. I actually felt tempted to ski downhill.  I, for sure, would like to ski cross country up there.  The whole trip I kept staring at them and understanding why some artists only paint mountain snow scenes.  I am slightly envious of E’s ski trip to Nendaz coming up next week.

But before that we are off to Zurich for the weekend!  E and I are going to see horse show jumping and H and Mark will be exploring the realms of dinosaurs!