October was Breast Cancer Awareness Month, but taking care of your health should just happen in October.  According to the Susan G. Komen Foundation there will be 246,660 new cases of breast cancer this year and 45,540 deaths due to breast cancer. The earlier you can catch breast cancer the easier it is to cure and the higher the survival rate.

In September I had a routine visit with my Gyn and he suggested that now that I am a “woman of a certain age” I consider having a mammogram. Sure! I said. I like to be pro-active about my health … especially when I’m fairly sure the test will be a breeze and everything will come back with glowing approval.  So, sign me up to squish my boobs, Doc.

He got me a referral to the Shady Grove Adventist Breast Center. They have a whole center just for ta-ta health.  The outside of the office looks like a fairly non-descript cement and glass medical office building rising up out of an asphalt parking lot.

The inside of the Breast Center, however, puts some spas I’ve been in to shame.  Calming colors, tinkling music, and serene, nature-inspired art greet you along with the cheerful and friendly staff. I was directed to the Keurig coffee maker for coffee or tea, or I could grab a bottle of water from the cooler underneath the coffee counter. Even the chairs and couches were of a spa waiting room quality. Certainly not the plastic kind found in most doctors’ offices.

Once I got called back into the changing room and actual medical area it seemed more doctor-like, but still very calming. And yet another Keurig and water bottle cooler. 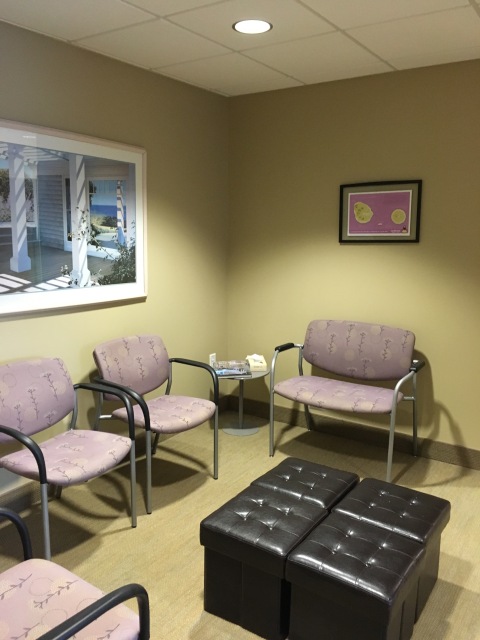 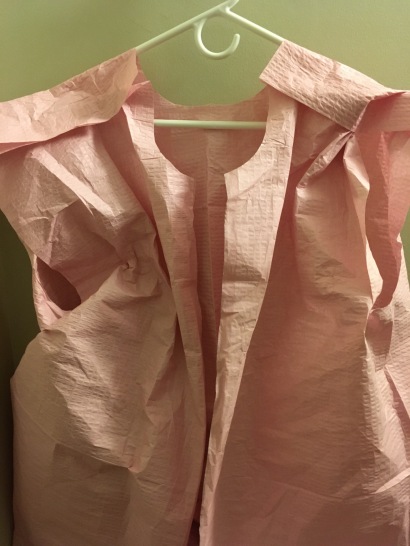 The mammogram technician showed me to a changing room and gave me a not-at-all glamorous or spa-like paper gown the same shade of pastel pink as a Necco Wafer candy.  She had me remove my shirt and put on the Necco Wafer top and then wait for her in the room above.

I had pretty much just stepped my right foot into the waiting area and my technician popped around the corner to escort me to The Room.

The Room with The Machine.

It’s weird, but I feel like I have been taught to fear the mammogram machine. I’ve been told it will hurt. A lot. That it defies ta-ta physics by flattening the girls out when nature says they are supposed to be round. Or at least oval.

Is it the imminent, forth-coming pain? Or is it the potential results?  Almost like Eve’s apple of knowledge.

But first let me tell you that it is not that painful.

There is a little bit of pinching, but stubbing your toe against a rock is much more painful than getting a mammogram.

Frankly, the worst part was not being able to wear deodorant to the appointment. I get that nervous sweat whenever I go to a doctor’s appointment and I rely on some Secret to help hide my fear. But in this case you can’t wear it. There are some additives and metals some products that mess up the test. Best to be stinky than to have to come back. 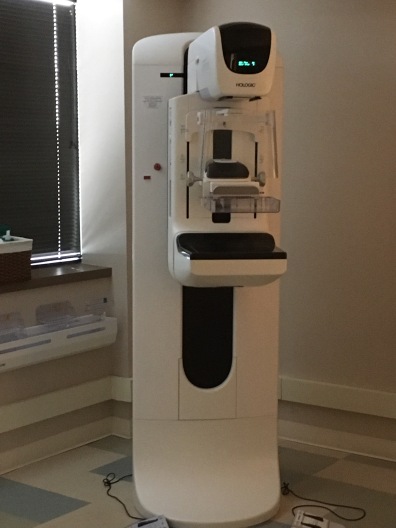 The technician helped to position my girls into the machine. She took 4 images, 2 on each side. The first pushed my breasts into a horizontal line that they should have been capable of. The second forced them into a 45 degree angle line that made me feel like they were be pushed up against a mountain.

The machine started to whir. The pinching started and then she says, “Don’t Breathe.”

No problem. I was already sucking in my breath to keep from a repeated litany of “owieowieowieowie” while the machine clamped down.

But it was over in 5 seconds.

I was literally back there for 5 minutes. From top off to top back on.

And they do give you a little warning or caveat about your results. If this is your first mammogram you might be asked to come back for more images. They want to create a baseline view so they can compare your future mammograms to this first one.

“Cool,” I said, not believing for a minute that I would have to come back.

And then I got an email an hour later.

If I thought I had nervous sweat before that was nothing compared to panic sweat that I broke out into.

It turns out that I had an “asymmetrical glandular abnormality” and needed to come back in for more images and an ultrasound.

What the fuck is an “asymmetrical glandular abnormality??” I asked.  It seems the image of my left breast was slightly different than my right.  “Okay. So you’re not actually going to tell me what this means.” Fine. I made my appointment for 6 days later.

In those 6 days I Googled “asymmetrical breasts” and “glandular abnormality in breast” and – my fingers really hesitated over the keys before typing this – “breast cancer.”  I probably searched them about 4 times a day. And then I tried to very casually and with an extremely light tone that fooled no one ask all my doctor friends about “glandular abnormalities.”

“Those could totally be from my fibroid cysts I found in my breasts when I was 19, right? RIGHT??”

My husband and my friends did their best to calm me down.

I also made various promises to myself and the universe. Over those 6 days I swore that if these tests came back okay I would:

Finally, the 6 days were up and I was back at Shady Grove Adventist having my girls squished in The Machine again. My technician was so nice. She said we’d read these images first and then, if it was needed, I would go and have an ultrasound. A mammogram is just a 2-D picture image, while an ultrasound can give you a 3-D image. It can help determine if this dark spot is a solid thing or if it is actually hollow or layers or tissue.

So we got started. And this time I got *3* images taken of my left breast! In many different shapes and positions! Wooo!

And then, because I am extra special, I got to advance to the ultrasound round!

There was nothing spa-like about the ultrasound room. It was all business in there. They propped me sideways on some bolsters and pillows, squirted warm lube on my ta-ta and then used a roller wand to start looking at what was going on in there.  It was just like when I got ultrasounds when I was pregnant. I was fascinated then and I was desperately curious now.

She was making some polite chit-chat to start with. The kind that is supposed to calm you down, but prevents you from making any kind of real connection.  After awhile she saw me peeking at the screen and said, “Do you want to look?”

And that’s when I knew it would be okay.

They never let you look at the screen if it’s not going to be okay.

We had the best conversation about sound wave physics and how the waves are absorbed by dense objects and make them turn white and pass through less dense objects making them look black. Connective tissue is dense and fat is not. She showed me how I have layers of dense connective tissue stacked in between layers of fat. I will never look at lasagna the same way again.

The head radiologist came in and took a look and everything was just fine. I could go home.  I was done.

So go. Go and get your mammogram. Even if you are only 40 or 41 or 42. If you catch it early breast cancer can be beat. If you have fibroid cysts like me you can have a much better baseline and a much, much better chance of catching any changes that might occur.